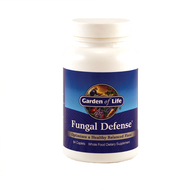 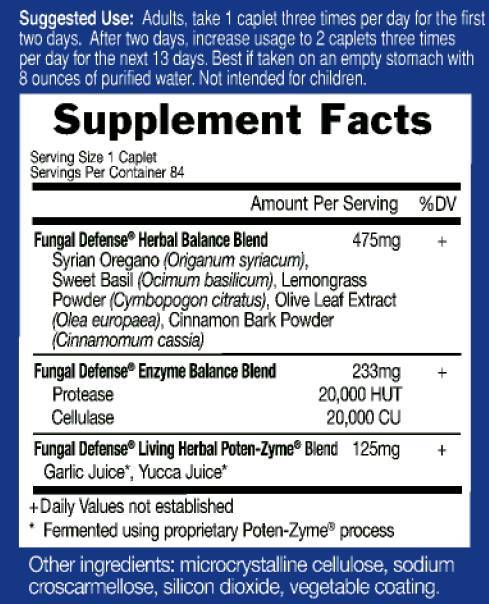 Fungal Defense by Garden of Life

It is now believed that yeast overgrowth in the body often referred to as Candidiasis, is actually caused by a systemic fungal infection. Understanding this fungal link is the key to restoring proper system-wide balance. Normally, fungi live in a healthy balance with other microorganisms including bacteria and yeasts; however, certain conditions can cause fungi to multiply, weakening the immune system and causing infection. Because fungi travel through the bloodstream to many parts of the body, varying symptoms may manifest including:

Candida Albicans is a single celled fungal yeast. Among the most prolific organisms on the planet, it is impossible to keep it out of your body. In a healthy person, it does little harm because its population is kept in check by beneficial microorganisms (probiotics) which are, however, easily destroyed by antibiotics, many prescription medications, birth control pills, poor diet, and daily stress. This can then cause the Candida yeast to grow out of control, producing chemicals that are toxic to the body. Yeast overgrowth is thought to affect over 40 million Americans, both men and women, and is especially prevalent in hyperactive children and those with ADD and ADHD.

A Word on Diet

The powerful ingredients in Fungal Defence are specifically targeted to destroy yeast and other fungi and to restore a balanced, healthy internal environment. To prevent re-infection and to maintain a properly balanced system, it is critical to reduce, or in some cases, eliminate the intake of the following foods: sweets, carbohydrates (such as bread, pasta, muffins, glutenous grains, etc), alcohol, vinegar, fruits, and aged cheeses - as these foods (especially sugars and carbohydrates) feed the yeast which thrive in sugary environments and actually cause you to crave these very foods.

The Enzyme Connection:
Candida research favorably supports the indespensible role of specific enzymes and their ability to literally digest Candida cell walls. The Fungal Defense formula utilizes potent amounts of both cellulase and protease. Cellulase breaks down fibrous carbohydrates while protease hydrolyzes (digests) protein. These two enzymes help to dissolve the cell wall of yeast and other fungi.

Garlic and Yucca Juice Extracts:
Known as Russian penicillin, Garlic is considered to be nature's premier antibiotic and anti-fungal. It is effective against bacteria and yeast that may be resistant to antimicrobial medications yet does not destroy the body's normal, friendly flora.

A potent blood purifier, the juice from the Yucca root found predominantly in the desert Southwest aids in digestion and produces surfactants which help to breakdown the lipid envelope that coats certain viruses and fungi including Candida.

Statements on this website have not been evaluated by the Food and Drug Administration. These products are not intended to diagnose, treat, cure, or prevent any disease, but rather are dietary supplements intended solely for nutritional use.

More Info on Garden of Life Fungal Defense 84 Caplets
† Statements on this website have not been evaluated by the Food and Drug Administration. These products are not intended to diagnose, treat, cure, or prevent any disease, but rather are dietary supplements intended solely for nutritional use.
My Account