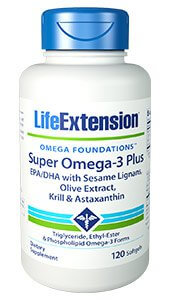 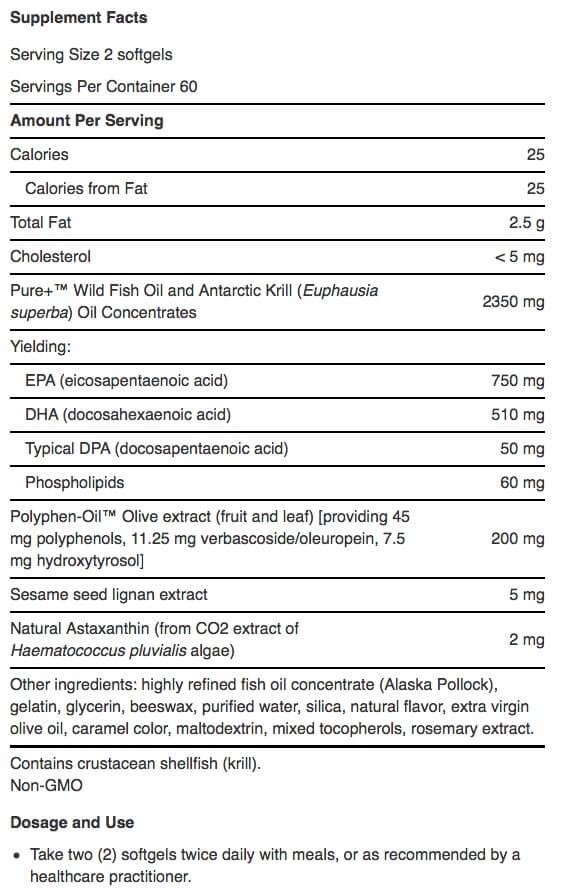 Emerging research suggests that different sources of omega-3 fatty acids, such as fish oil and krill oil, provide complementary effects upon cellular targets throughout the body.

Evidence suggests that by combining both fish and krill oil, you can maximize uptake and the protective benefits of a wide spectrum of omega-3 fatty acids. To provide enhanced coverage, a new Super Omega contains a potent concentration of fish oil, olive fruit, and sesame lignans, plus krill and astaxanthin.

The omega-3s found in krill appear to be more rapidly incorporated into red blood cell phospholipids, which are rapidly absorbed into brain cells.

When combined, krill and fish oil appear to offer enhanced benefits for both the cardiovascular and nervous system than either form by itself.

This OMEGA FOUNDATIONS supplement features a sustainably harvested fish oil made from wild caught cold-water Alaska Pollock and processed in the United States within hours of harvest for exceptional freshness. It is produced with a proprietary technology that purifies the fish oil with a highly advanced distillation process that reduces environmental pollutants. The result is a fish oil so pure, it actually exceeds standards set by international rating agencies. And it’s also produced from a Marine Stewardship Council (MSC) certified sustainable fishery that is dedicated to sustainable harvesting practices and protection of the fishery ecosystem.

This formula has been fortified with additional astaxanthin, which is naturally found in krill oil. Astaxanthin is a powerful antioxidant carotenoid that has been shown to control free radical activity and boost mitochondrial function. A large body of research suggests that astaxanthin helps support joint, DNA, brain, cardiovascular, immune, and mitochondrial health. It also supports healthy blood glucose levels for those already in the normal range, and protects sensitive cells in the eye.

In Super Omega with Krill, Astaxanthin & Olive Fruit Extract, the natural astaxanthin content of krill is fortified with additional astaxanthin for maximum stability and benefit.

In 2013, the results of a huge trial of people who followed a Mediterranean diet were published in the New England Journal of Medicine. Those who supplemented this diet either with olive oil or nuts showed such a huge reduction in primary cardiovascular problems that the trial was stopped early to spare the lives of those on the control diet.24 The Mediterranean diet—rich in omega-3 fatty acids, monounsaturated fatty acids found in olive oil, and antioxidant-rich fruits, vegetables, and herbs—has long been associated with cardiovascular health and increased life span.

The unstable nature of fatty acids like fish oil limits their biological efficacy in the body. Studies show that when sesame lignans are supplemented with fish oil, the beneficial effects are augmented.

More Info on Life Extension Super Omega with Krill 120 Soft Gels
† Statements on this website have not been evaluated by the Food and Drug Administration. These products are not intended to diagnose, treat, cure, or prevent any disease, but rather are dietary supplements intended solely for nutritional use.
My Account