Now D-Mannose, natural bladder infection support may help prevent the adhesion of E coli bacteria to tissues of the urinary tract and bladder. 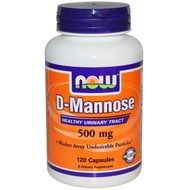 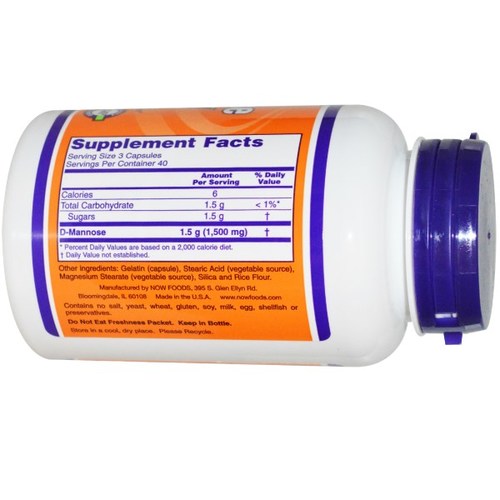 According to Wikipedia: "D-Mannose, which appears in some fruits including cranberry, may help prevent the adhesion of bacteria to tissues of the urinary tract and bladder." D-Mannose is a natural occurring simple sugar that appears to be a safe, practical alternative for the treatment of urinary tract infections. D-Mannose is not converted to glycogen or stored in the liver, but is mostly filtered through the kidneys and routed to the bladder.

According to Dr. Jonathan Wright, the bladder lining is comprised of polysaccharide molecules. Finger-like projections on the cell surface of E. coli bacteria adhere to these molecules, initiating an infection. In the presence of D-Mannose, E. coli preferentially attach to D-Mannose molecules forming a complex which is expelled the next time the bladder is emptied.

According to Dr. Jonathan Wright, an effective serving for an adult with a bladder infection or urinary tract infection is 3 to 5 times the single (1/2 tsp or 1 tablet) serving recommended by the manufacturer. He also recommends that this serving be taken "every 3 to 4 hours while awake until the symptoms are totally gone, which can take a few hours or one to two days." Dr Wright also tells us that this is effective 9 times out of ten. But if you have not seen improvement in symptoms in 24 hours, it is best to get "regular" antibiotic treatment.

"Dr. Wright tells this astounding story:
Our case is relatively well-known in the Seattle-King County area as this child's mother provided testimony about her case to the County Council when it was considering the establishment of a natural medicine clinic within the taxpayer-funded county public health system.

This mother brought her daughter to Tahoma Clinic in the 1980s. She also brought with her a very detailed set of notebooks in which she'd recorded descriptions of her daughter's numerous hospitalizations and extensive tests for nearly continuous urinary tract infections. By actual count, her daughter (not yet five years old) had been seen by 72 different physicians, and had been on antibiotics the majority of her life. Mother and father had been told the doctors were "running out of effective antibiotics", and that their daughter would likely need a kidney transplant during the next few years, as her kidneys were beginning to fail from the chronic infection. Extensive tests showed "normal kidneys, ureters, and bladder", with no discoverable reason for all the infection.

Fortunately, Mom also had records of many urine cultures. They were always the same: E.coli. At the end of our consultation, I advised her to give her daughter 1/2 to 1 teaspoon (approximately 1 to 2 gram)of D-mannose powder stirred into water every three to four hours while awake. Despite being a bit dubious that a simple sugar prescribed by a natural medicine doctor (remember, this was the 1980s) would do anything, mother tried it. Within 48 hours, the infection was gone. The Mom continued the treatment even though the infection was gone and her daughter remained infection free for over two years until the D-mannose was temporarily forgotten and the infection came back; resumption cleared the infection once more. She stayed on the D-Mannose for 10 years and she's had no urinary tract infection since, and has of course retained her own kidneys."

More Info on Now D-Mannose for Bladder Health 120 Capsules
† Statements on this website have not been evaluated by the Food and Drug Administration. These products are not intended to diagnose, treat, cure, or prevent any disease, but rather are dietary supplements intended solely for nutritional use.
My Account