FucoTHIN 180 softgels, is a compound that is found in several different types of seaweed. FucoThin is a natural, whole food based supplement that is made with a proprietary concentration of fucoxanthin combined with pomegranate. 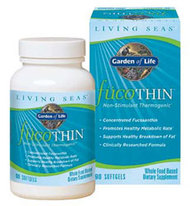 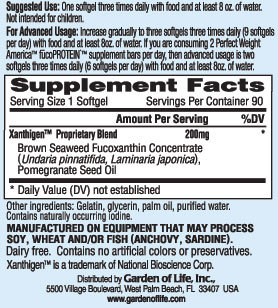 Fucothin by Garden of Life

*Extraordinary experiences. Use with a calorie conscious diet and moderate exercise.

What is Garden of Life FucoThin?
Garden of Life FucoThin is a natural, whole food based supplement that is made with a proprietary concentration of fucoxanthin combined with pomegranate seed oil, for a patent-pending formula that is naturally thermogenic. Fuco Thin has been studied by leading scientists for many years and is the only formula that has human clinical research to confirm its thermogenic effect.

What is thermogenesis?
Thermogenesis is the process by which the body increases its metabolic rate, requiring utilization of internal stores of energy, such as fat. FucoThin supports the metabolism or breakdown of fat in white adipose tissue, including belly fat, without stimulating the central nervous system.

What is fucoxanthin?
Fucoxanthin is a carotenoid (like lutein and lycopene), which is a powerful antioxidant that protects cells from free-radical damage. It is the pigment that gives brown seaweed its characteristic color and also participates in photosynthesis (the conversion of light into energy). It is found in several different types of brown seaweed.

Marine vegetables (edible seaweed) have long been considered among the most nutritious vegetation on Earth, and have been included in the diets of various Asian cultures since ancient times. Epidemiological studies strongly suggest that the consumption of marine vegetables in this population may be a contributing factor to their good health.

Fucoxanthin is the first marine algae-derived ingredient with clinically proven thermogenic effect. It is also known for its powerful antioxidant effect that protects cells from free radical damage. fucoTHIN contains an all-natural food concentrate of fucoxanthin from specially cultivated strains of brown marine vegetables grown in pristine waters off the Canary Islands.

What are the benefits of pomegranate seed oil?
Pomegranate fruit seeds are the source of an oil that has a unique fatty acid composition. This unusual fatty acid, punicic acid or conjugated linolenic acid, works synergistically with fucoxanthin to support natural thermogenesis.

Who will benefit from using Garden of Life FucoThin?
Anyone who is seeking to manage body fat and support a healthy metabolic rate while following a balanced diet and a regular exercise regimen.
More Info on Garden of Life FucoThin 180 Softgels
† Statements on this website have not been evaluated by the Food and Drug Administration. These products are not intended to diagnose, treat, cure, or prevent any disease, but rather are dietary supplements intended solely for nutritional use.
My Account