E. Coli bacteria can wreak havoc when they find their way into the wrong place, namely the urinary tract. In Fact, 80-90% of all bladder infections (cystitis) can be attributed to E. Coli entering the urinary tract, a problem 50 times more common in women and girls than in men. The remarkable thing about D-Mannose is that its chemical structure causes it to adhere to E. Coli bacteria even more tenaciously than E.coli adhere to human cells. Normal urination, therefore, with a sufficient level of D-Mannose present, becomes a simple and effective treatment for the condition. E. Coli cells coated by D-Mannose in the urine become unglued and get flushed right out of the body.

For three months, I have been dealing with a bladder infection. Although the standard tests (blood work, cultures, ultrasounds) came back normal, there was still blood in the urine and leukocytes. I have Multiple Chemical Sensitivity which makes me far more sensitive than your average person so further invasive testing was out of the question for me along with the side effects antibiotics often bring. I have been on your product several weeks now and the bladder infection symptoms are gone along with the white blood cells and traces.

I have been using D-mannose for a little over a month now and I LOVE IT!!! I have been on antibiotics for 14 years due to honeymoon syndrome. I came across this miracle cure on the web and thought I had nothing to lose. D-Mannose has given me not only the happiest bladder in town but peace of mind. I no longer think of getting a bladder infection all day long. The biggest bonus is at 14 years of marriage my sex life is the best it has ever been. Thank you, Thank you for bringing this product out for people like me! 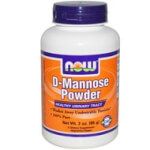 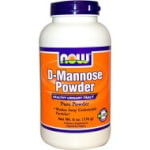 Abstracted and Edited from a Report Submitted to Progressive Laboratories by Michael Blue, M.D., Urologist

D-Mannose is a natural occurring simple sugar that appears to be a safe, practical alternative for the treatment of urinary tract infections. D-Mannose is absorbed eight times slower than glucose, and when ingested, is not converted to glycogen or stored in the liver, but rather goes directly to the blood stream from the upper GI tract. Hence, D-Mannose is mostly filtered through the kidneys and routed to the bladder. The bladder lining is comprised of polysaccharide molecules. Finger-like projections on the cell surface of E. coli bacteria adhere to these molecules, initiating an infection. In the presence of D-Mannose, E. coli preferentially attach to D-Mannose molecules forming a complex which is expelled with the next voiding. D-Mannose probably works 80-90% of the time because the bacteria disabled by Mannose causes 80-90% of urinary tract infections. Whereas antibiotic treatment radically changes GI bacterial populations required for good health, potentially causing fungal or gastrointestinal infections, D-Mannose removes bad bacteria by attachment and voiding.

Study subjects were Dr. Michael Blues long-term patients, who had a history of reoccurring urinary tract infections. Subjects included 42 females (12-83 years old) and 18 males (25-71 years old). After urine culture to determine specific bacterial cause, if any, subjects were started on a D-Mannose daily regimen.

Of the 42 female subjects, 24 were confirmed by culture to have a urinary tract infection. In 19 cases (~80%), E. coli was the diagnosed cause, in four, Klebsiella, and in one, mixed bacteria. In the confirmed culture group, two scoops of D-Mannose daily were given for one week. Of the 12 (50%) who returned for follow-up cultures, eight were negative. Patients indicated that the symptoms had disappeared. Statistically, 17 of the 24 (71%) females in the confirmed-culture, D-mannose-treated group reported symptom improvement. Although three of the 24 (12.5%) were unable to be contacted, they did not return for additional treatment. Only four of 24 (17%) reported no symptom improvement after D-Mannose treatment. Those females who were not confirmed by culture to have bacterial urinary tract infection but had urinary tract infection-associated symptoms were classified into a painful-bladder-syndrome (PBS) group. Of the 18 PBS females who were treated daily with two scoops of D-Mannose, 17 (94%) reported symptom improvement, the lone exception being a subject unable to be contacted, but also not returning for treatment. Eighty percent became totally symptom free. Of the 18 male subjects, 10 were confirmed by culture to have a urinary tract infection. Seven had neurogenic bladders from spinal cord injuries, three of whom were on intermittent catheterization and four had indwelling supra-pubic tubes. Two men had been incapacitated with recurrent sepsis, retention, and obstructive uropathy. Both men underwent insertion of supra pubic tubes. Once released from the hospital, both were placed on a D-Mannose daily regimen. Improvement was suggested by their ability to avoid additional hospitalization. In the group diagnosed with E. coli-related urinary tract infection and treated with D-Mannose, significant improvement was reported. Due to the composition of the male group, few responded as dramatically as females.

Consistent with existing literature, about 50% of those reporting urinary tract infection symptoms were actually confirmed by culture to possess bacterial infection. The therapeutic use of D-Mannose on acute urinary tract infections in this study was effective in eliminating or ameliorating symptoms. In addition, 80% of the painful-bladder-syndrome group became symptom free using D-Mannose. Over the six-month study, three females with different issues showed especially noteworthy responses to D-Mannose. The first was a 50-year old female with neurogenic bladder and incontinence suffering from a monthly urinary tract infection. Endoscopically, her bladder revealed numerous areas compatible with recurrent urinary tract infections. After three months of D-Mannose, her urine was sterile, and her bladder mucosa returned to normal. The second woman complained about bladder pain for which she had received numerous, unsuccessful therapies. After one week of D-Mannose, her pain ceased. The third woman presented an E. coli infection and pronounced structural findings in her bladder called Cystitis Cystica, all of which disappeared after three months on D-Mannose.

HFE Magazine
† Statements on this website have not been evaluated by the Food and Drug Administration. These products are not intended to diagnose, treat, cure, or prevent any disease, but rather are dietary supplements intended solely for nutritional use.